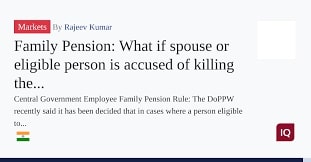 The Department of Public Works recently announced that “in cases where a person eligible for family pension is charged with murdering a Government servant or abetting in the commission of such an offence and family pension payment to him/her is suspended under Rule 54(11-C) of the CCS (Pension) Rules, 1972, parents pension may be allotted to other eligible members of the family.”

Suppose the accused individual is cleared of the charge. In that case, the home pension will be payable to them from the date of the acquittal, and the family pension to another family member will be discontinued from that date, according to DoPPW.

In addition, before the new DoPPW decision, in cases where the payment of family pension was suspended under Rule 54 (11-C) of the CCS (Pension) Rules, 1972, the arrears of family pension accruing from the date following the death of the Government Servant/Pensioner will be paid to the other eligible family member of the Government Servant/Pensioner.