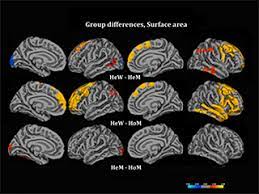 The study, published in the Proceedings of the National Academy of Sciences journal, involved 90 men and women, including homosexuals and heterosexuals of both genders. Researchers found with the help of brain-scanning equipment, that there were differences in the brain activity and anatomy of the subjects.
Neural activity in the brain was monitored by charting blood flow.

More attention was paid on the amygdala, an almond-shaped structure inside each hemisphere of the brain, which is associated with processing and storing emotions. The researchers discovered that brain activity in homosexuals was similar to that of heterosexuals of the opposite sex.

Brain scanners were used for the first time to look for the reason behind variations in certain cognitive abilities, which the scientists have noticed in homosexual people of both sexes for quite-a-while now.

Scientists at Karolinska Institute, where the individuals were scanned said that the differences found could not be mainly explained by ‘learned’ effects, and there has to be some other mechanism to lay them, either before or after birth.

“As far as I’m concerned there is no argument any more – if you are gay, you are born gay,” said Dr Qazi Rahman, a lecturer in cognitive biology at Queen Mary, University of London.

“The brain network which determines what sexual orientation actually ‘orients’ towards is similar between gay men and straight women, and between gay women and straight men,” he said. “This makes sense given that gay men have a sexual preference which is like that of women in general, that is, preferring men, and vice versa for lesbian women.”