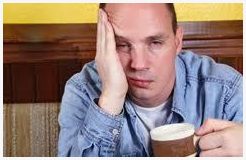 Alcohol may be deemed to be sleep-inducing, but in fact, it robs you of your sleep, researchers have claimed.

According to the findings of a new study, drinking alcohol may help you fall asleep but it disrupts night’s sleep, leaving you less rested and tired.

The study, published in the journal ‘Alcoholism: Clinical & Experimental Research, found that the higher the consumption of alcohol least was the duration of deep sleep the person got.

The study
For the purpose of the study, researchers at the London Sleep Centre analyzed data of 20 previously published studies that measures the impact of alcohol on sleep.

In all, the studies looked at over 500 people who consumed low, moderate or high amounts of alcohol before going to bed.

All participants underwent sleep screening while they snoozed in a sleep lab.

Regardless of the amount of alcohol people consumed, the beverage hastened the time it took them to fall asleep. Furthermore, it increased the duration of deep sleep during the first half of the night.

But, the incidence of sleep disruption increased during the second half of the night, the researchers found.

REM sleep is defined as a sleep stage in which dreams occur. It is considered to be the most important stage for memory.

Furthermore, the higher the amounts of alcohol a person consumed least was the duration of deep sleep he/she got, leaving him/her less rested and tired.

“Alcohol, on the whole, is not useful for improving a whole night’s sleep,” the study’s lead researcher, Irshaad Ebrahim, medical director of The London Sleep Centre, said. “Sleep may be deeper to start with, but then becomes disrupted.”

“Lack of proper sleep can have a detrimental effect on concentration, motor skills and memory,” Ebrahim highlighted.

Divorcing? What happens to your home mortgage?