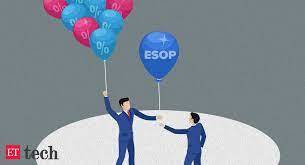 Mobikwik announced that it had set aside 4.5 million shares, or 7% of its equity, for its approaching public offering through its employee stock option plans (Esop).

Employee stock options are a sort of reward that corporations provide to their employees. Employees are given the option to purchase the company’s shares at a specific price for a set amount of time. Mobikwik’s Esop program is designed to “recruit, retain, and reward deserving employees in a competitive employment market,” according to a news release.
According to the Gurgaon-based fintech firm, 20% of its awards were made around the time it submitted its draft red herring prospectus (DRHP) in July. In its IPO later this year, the company hopes to collect Rs 1,900 crore ($255 million).
Employees at top-tier companies like Paytm, PhonePe, Udaan, Razorpay, Cred, Acko, Zerodha, and Ola have been offered stock options. In July, ET revealed that a slew of firms had repurchased shares worth about $546 million from employees in the previous year.

Fall in U.S. Credit Rating: What It Means for Small Businesses