Freshworks aims for nearly $9 billion valuation in US IPO 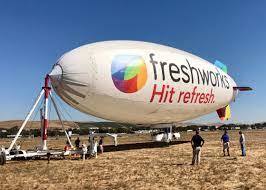 According to a regulatory filing by Freshworks Inc. on Monday, the business and customer interaction software company is looking for a valuation of roughly $9 billion in a US initial public offering.

The company, which competes with Salesforce.com Inc, announced that it would offer 28.5 million shares at a price range of $28 to $32. It will raise $912 million at the top of the field.

The San Mateo, California-based company, joins a plethora of other software and technology companies on the list. Market investors have shown great interest in most of these debuts, believing that the companies will gain from the move to hybrid labor that will occur due to the epidemic.

According to Reuters, Freshworks’ stock market debut could put the company’s value at over $10 billion.

More than 50,000 firms in 120 countries use its platform, including well-known names like Delivery Hero SE, Vice Media, and Swedish payments provider Klarna.