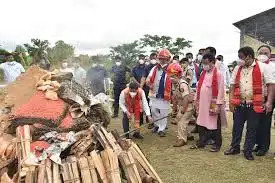 For the public burning of drugs, four venues have been chosen. The drive took place today in Diphu and Golaghat and tomorrow in Nagaon and Hojai.

“We just knew Assam was a narcotics transit route from neighbouring nations to mainland India,” Mr. Sarma said. “But, given the extent of the narcotics industry, we can say that this habit has spread among some youths in Assam as well.”

Decrypting Crypto Trends: Why is Square moving into the Bitcoin custody space?