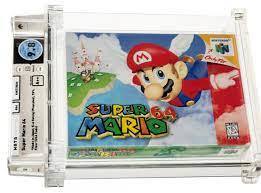 Nintendo’s iconic character made his first appearance in a 3D video game in “Super Mario 64.” The majority of Mario’s previous appearances were two-dimensional, side-scrolling games, such as the Nintendo Entertainment System’s original Super Mario Bros.

In a statement, Heritage Auctions Video Games Specialist Valarie McLeckie said, “It is impossible to overestimate the significance of this title, not only to the history of Mario and Nintendo but to video games as a whole.”

Mario isn’t the only one who makes a killing at auctions. According to Heritage, a unique 1987 version of the NES videogame “The Legend of Zelda” sold for $870,000 last Friday.