Chicago’s $15 minimum wage for most workers makes an effect. 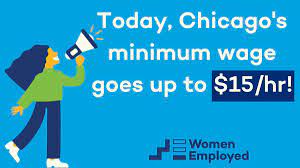 CHICAGO, — For most workers in Chicago, the minimum wage jumped to $15 per hour on Thursday. According to officials, the endeavour secures a raise for an estimated 400,000 residents in the city.

Workers in businesses with 21 or more employees will be entitled to a $15 minimum wage. According to Chicago City Mayor Lori Lightfoot’s administration, workers at smaller firms with 4 to 20 employees will have their minimum wage hiked to $14 an hour, with a progressive increase to $15 an hour by 2023.

Beginning Aug. 1, all domestic employees, including housekeepers, nannies, caretakers, and others, will be paid a minimum wage of $15 per hour.

The minimum salary for tipped workers increases to $8.40 or $9, depending on the employer’s size, although companies must make up the difference if workers do not pay the required wage with tips.

“However, Chicago isn’t the only metropolis with workers who have gone far too long without proper protections,” Lightfoot added.

Jeff Bezos is stepping down as CEO. How rich did Amazon make him?