Fiscal deficit reined in at 8.2% of Budget Estimate.

Even though the April-May data indicated a 14 percent increase, capex in May fell by 41% to Rs 15,835 crore, partially echoing the impact of the second Covid wave. 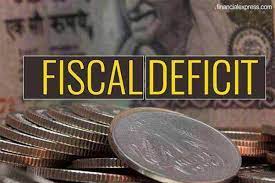 The fiscal deficit at the Centre reached 8.2 per cent of the budget estimate (BE) for the fiscal year 2021-22 in April-May, compared to 58.6 per cent a year earlier, as tax and non-tax revenue soared due to a good base.

In April, the administration cut spending as well. Nomura now forecasts a fiscal deficit of 7.1 per cent of GDP in FY22, up from 6.8 per cent in the budget.

Even though the April-May data indicated a 14 per cent increase, CAPEX in May fell by 41% to Rs 15,835 crore, partially echoing the impact of the second Covid wave.

The Centre’s spending in May increased by 23% year on year, following a 26% dip in April, despite a slight decrease in the full FY22 budgeted expenditure.

The Union Cabinet has approved the relief package for Coronavirus pandemic affected sectors.