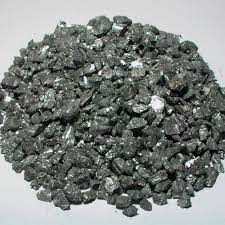 The lithium ride was a great one. Cobalt, too. All they needed was their Elon Musk moment, which came in the form of the Nevada battery gigafactory. The next Elon Musk moment won’t be about lithium at all—or even cobalt. It will be for an element that takes everything electric to its revolutionary finish line: Vanadium.

The one moment that will change everything … and that moment may be near.

Vanadium is lithium on steroids—wildly bigger and the only way forward from here. We may have already reached the peak of our electric revolution through batteries with lithium.

We need bigger batteries, preferably the size of a football field—or 20.

That’s vanadium—Element 23. The answer to our issue of scale.

“It’s no longer a technological maybe,” says Matt Rhoades, president and CEO of United Battery Metals, a Colorado vanadium explorer sitting on one of the few known sources of the next big battery metal in the entire United States.

Rhoades should know … his company is behind the discovery that hopes to put America definitively on the vanadium map. UBM’s Wray Mesa Project in Colorado has a mineral resource base estimate indicating resource of around 2.7 million pounds of vanadium—not to mention all the uranium they already know is there for additional upside.

“Vanadium is here, and lithium is scared because the $13-billion energy storage market has already found its new poster boy,” Rhoades told Oilprice.com.

The Moment of Truth

Indeed, Rhoades is an expert at timing.

The worldwide battle for vanadium is ramping up …

The Chinese have already had their Elon Musk moment …

And vanadium was the best-performing battery metal last year, beating out even lithium and cobalt.

The next ‘moment’ will be when someone in the U.S.—always one step behind the Chinese—announces plans for an American vanadium battery gigafactory. Anyone who hasn’t gotten in before that moment will be nursing their lithium hangover.

China is already building the world’s largest vanadium flow battery (VFB) gigafactory in Dalian, with the massively powerful (200MW/800MWh) batteries to be manufactured by Rongke Power.

It covers an area bigger than 20 soccer fields.

And thanks to the Chinese, vanadium was the best-performing battery metal last year.

And it’s vanadium pentoxide that is the main ingredient in vanadium redox flow batteries used for grid energy storage.

For a junior minor like UBM with a market cap of just over $10 million—that potential 2.7 million pounds of vanadium begins to sound like strategy at its best and brightest.

Why Vanadium Changes Everything

If you were just getting the hang of lithium and cobalt in the battery mix, vanadium might sound complicated—but it’s not.

It’s as simple as size. This is where we get to scale up because when it comes to energy storage, bigger is better. In fact, bigger is the only way forward in this game.

This is possible because vanadium flow batteries store their energy in tanks. The fluid (electrolyte) that transfers charges inside a battery flows from one tank through the system and back again, making a closed circuit. They can charge and discharge simultaneously.

We’re talking tanks that can be as big as you want them: an aquarium, a shipping container or even an Olympic swimming pool—as big as your imagination can take you.

For renewable energy it is a game-changer. VRBs will forever change the capacity of wind and solar energy, making it limitless and cheap.

Vanadium is superior to lithium in every way. Not only does it have eternal life (unlike lithium), it’s not explosive, flammable or toxic.

Not only can it be scaled up cheaply, but it’s actually cheaper to scale it up, making it the antithesis of lithium.

Put in another way: It’s tough to scale up a lithium-ion system. If you double the size, you double the cost. Not so with vanadium: All you have to do is make the tank bigger, and the bigger the scale the lower the cost.

And that scaling up is already happening. Vanadium batteries are already providing complete energy storage system for $500 per kilowatt hour. In less than a year, that is expected to be down to $300. By 2020, we could be looking at $150/kilowatt hour.

Vanadium: Finally, America Gets A Piece of the Pie

Even though this is the biggest energy story right now, vanadium isn’t just a bet on batteries—that’s why Mining.com calls it “the metal we can’t do without and don’t produce”.

Just as UBM’s new vanadium discovery is also an original uranium resource, vanadium can also be used in nuclear energy. By 2025, analysts estimate that 85 percent of all vehicles will incorporate vanadium alloy to reduce their weight and increase fuel efficiency.

Still, strategic as it is, America has fallen behind, and now that the global race for vanadium is on in the battery game, that will hurt.

In China, vanadium is already becoming the alternative to lithium. The next big moment will be this:

“If a vanadium battery producer steps forward with bold plans to produce vanadium flow at mass scale, giving the industry its Elon Musk or lithium ion moment, the potential for the technology to be the second most deployed ESS battery in the world is there,” says Simon Moores of Benchmark Mineral Intelligence, a battery materials research and price discovery provider out of London.

Rhoades certainly agrees and UBM is in that wonderful position of potentially becoming the only American source for the key rare earth metal that will power our scaled-up “liquid electricity” breakthrough.

“The vanadium flow battery scale-up for massive energy storage makes the electric vehicle push look like child’s play,” he said. “Lithium was a teaser. Vanadium is where it all gets huge.”

We watched lithium take center stage, but that may be just the prologue. Vanadium could be the conclusion.

Other companies in the booming commodity space you should keep an eye on:

Tesla Motors Inc. (NASDAQ:TSLA): No large cap company has dazzled over the past couple of years like Tesla, which overtook giant GM this year in market cap—a major, unexpected feat. Tesla is the future, and its stock price agrees.

Tesla’s electric cars will eventually be more profitable than traditional cars, and easier to produce. Costs will keep coming down, especially now that Tesla’s has launched its battery gigafactory in Nevada, and when it gets battery (and lithium) prices down.

It is entirely feasible that Tesla will be selling over 2 million cars annually in less 6-7 years from now, despite recent management issues.

General Motors (NYSE:GM) is a household name. GM was born at the turn of the 20th century and has been a leading innovator in the automotive industry ever since. Even though it’s been surpassed in market cap by Tesla (of all companies), it is still the furthest ahead of the Big 3 car makers from Detroit in terms of EVs and self-driving cars.

Recently, GM acquired Cruise Automation—a self-driving car company, and it seems determined to forge ahead even faster to play catch-up with the future. Additionally, GM is a leader in the booming electric vehicle market. As countries across the world begin to pass regulations on combustion engines, GM stands to gain significantly as an early adopter in the EV game.

Cameco Corporation (NYSE:CCJ) Cameco is one of the largest global producers and sellers of uranium and nuclear fuel. Its operating uranium properties include the McArthur River/Key Lake, Cigar Lake, and Rabbit Lake properties located in Saskatchewan, Canada; the Inkai property situated in Kazakhstan; the Smith Ranch-Highland property located in Wyoming, the United States; and the Crow Butte property situated in Nebraska.

While many analysts see low uranium prices as a problem for miners, the OPEC like move from world uranium leader Kazakhstan to bump prices has benefited Cameco and its peers significantly.

FMC Corp. (NYSE:FMC) founded in 1883, FMC has been around the block and back. FMC has a long history stretching between many different industries, but within all of them, FMC has remained a leader in innovation.

FMC’s involvement in the lithium industry is particularly notable. The company is one of the top three in lithium and associated technologies. And recently, the company announced that it will be launching a new company, Livent, which aims to raise $100 million in an initial public offering to establish its place as a dominant lithium supplier.

At the end of August, Ballard announced a huge divestment agreement, releasing non-core assets to Revision Military Ltd., for up to $16 million in cash to provide a hefty boost to its fuel cell business.

Planning retirement? Here are the secrets to retire gracefully!